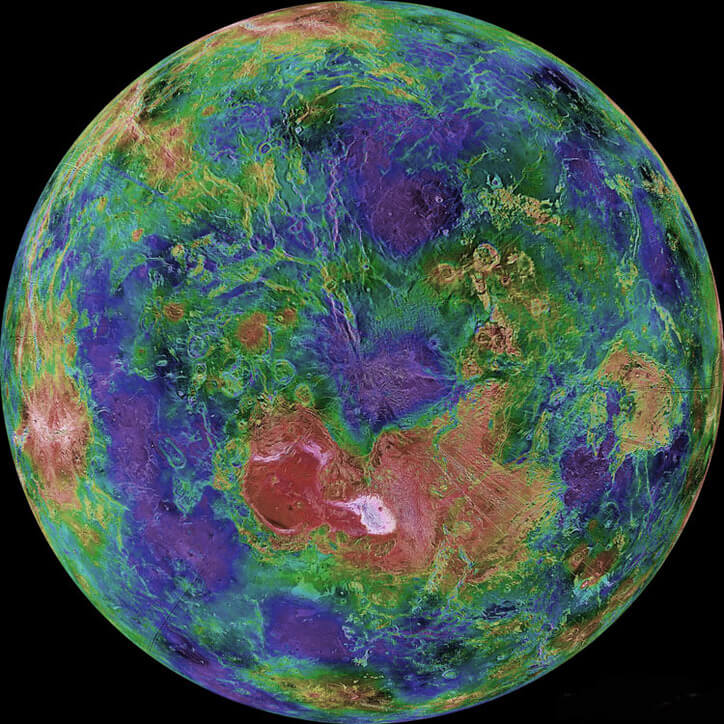 Venus orbits our Sun, a star. Venus is the second closest planet to the sun at a distance of about 67 million miles (108 million km).
One day on Venus lasts 243 Earth days because Venus spins backwards, with its sun rising in the west and setting in the east.

Venus has no moons and no rings.
Named after the goddess of love and beauty, Venus has become nearly synonymous with “woman” in popular culture, as referenced by the famous relationship guide Men are from Mars, Women are from Venus. As a solar system locale, Venus was a popular destination for early 20th century science fiction writers; before we knew about what lay beneath Venus’ mysterious cloud cover, writers could speculate about a more hospitable planet and its possible inhabitants.
In Vedic astrology, Venus is called a benefic planet. Venus effects love, life partner, worldly splendour, reproduction and erotic thoughts. Several remedies have been given for the peace of Venus. Those people, whose horoscope is in high spirits in the horoscope, enjoy the physical resources in life. At the same time, the weakness of Venus in the horoscope starts causing financial hardships, problems from female side, diabetes and worldly pleasures. In Astrology, donations, worship and gems are suggested for blessings of Lord Venus. These measures related to Venus include the law of fasting on Friday; doing Paath of Durgasaptashati donating rice and white garments etc all impresses the lord Venus. If Venus’s position is weak in your horoscope, then be sure to take these measures. By doing these remedies, auspicious results from Venus will be realized and the ominous effects will be removed.