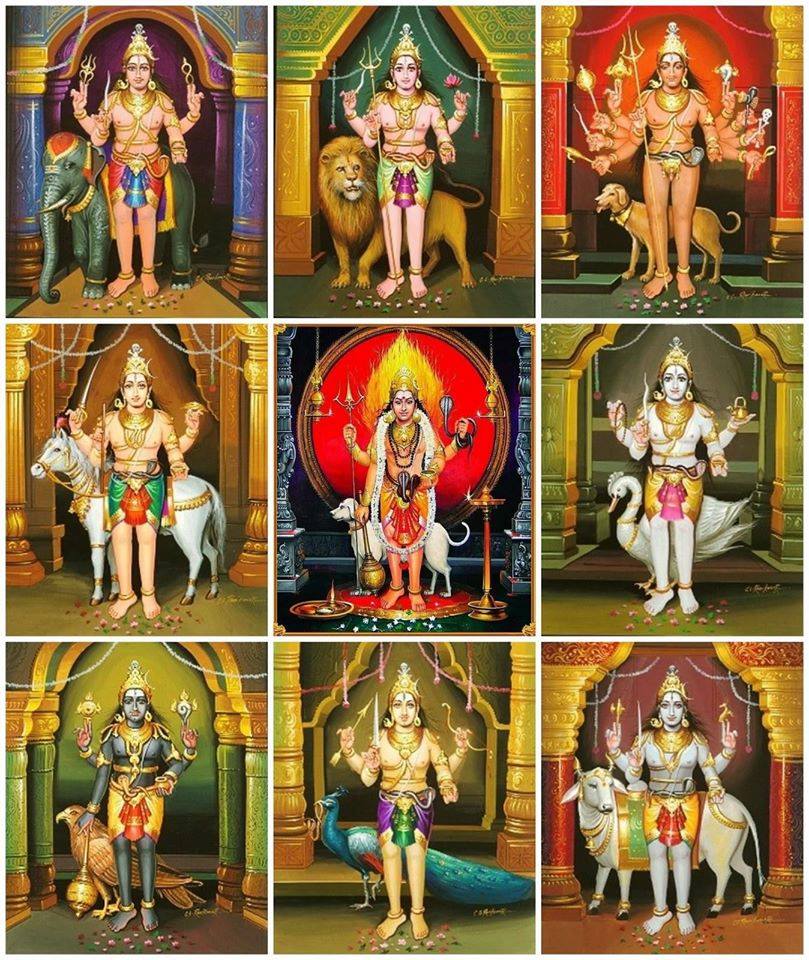 LORD BHAIRAV
About Lord Bhairav – Lord Bhairav is an incarnation of Lord Shiva. Its worship is very useful to win over your enemies, success and all materialistic comforts. It is very easy to please lord Bhairav by doing normal worship daily. Lord Bhairav guard the Lord Shiva temple, due to which He is called “Kotwal” also. Batuk Bharav is the most worshipped form of Bhairav in tantra.
Mantra – OM hrim namah sivay mahakalay namah.
Procedure – Keep a Shree Bhairav idol or pic in front of you and offer Coconut, Flowers, Sindoor, Mustard oil, black til etc and do its mantra. Liquor is also offered to Bhairav. During the mantra sadhna it is essential to eat only once a day, observe celebacy and sleep only on the ground. Mantra is to be repeated 1,25,000 times to obtain the blessings of lord Bhairav.
A person will be blessed with money & prosperity, son, family and all unexpected problems will be solved within 90days only

Kala bhairava is the God who is the protector of Benares. He is supposed to be the fearsome aspect of Lord Shiva. Once Brahma insulted Lord Shiva and his fifth head teasingly laughed at Lord Shiva. From Lord Shiva came out the Kala bhairava (Black Bhairava) who tore off the fifth head of Lord Brahma. On the entreaties of Lord Vishnu, Shiva pardoned Lord Brahma. But the sin (in the form of alady) of beheading Lord Brahma followed Kala bhairava everywhere. Also the head of Brahma stuck to him. To keep away the sin and punishment which were chasing him, Kala bhairava entered the city of Benares. The sin could not enter the city. Kala bhairava was made as the Kotwal (Inspector general) of the city of Benares. Kala bhairava rides on a dog. A pilgrimage to Kasi (Benares) is not supposed to be complete without visiting the temple of Kala bhairava.
Another story identifies Kala bhairava with Veerabhadra who cut off the head of Daksha the father of Sathi Devi, when he insulted lord Shiva. Sathi’s body was cut into pieces and strewn all over India giving rise to Shakthi Peetas. Outside every Shakthi Peeta is the temple for Bhairava.
There is also another interpretation. He is the form of Shiva who controls the growth and management of time. (Kala means time). Whoever wants to spend, manage or ration their time in a proper manner should pray him.
He is also considered as the guardian of temples of Lord Shiva. After locking the doors of the temple of Lord Shiva, the keys are ceremonially offered to Bhairava and taken back in most of the Shiva temples.)
1.Gadgam , kapalam , Damarugam , Trisoolam,
Hasthambhuje santhathum trinethram .
Digambaram basma Vibhooshithangam,
Namyaham Bhairavam Induchoodam.
I salute Bhairava who wears the crescent,
Who holds in his lotus like hand,
Sword , skull , drum and trident ,
Who wears the directions as cloth,
And who has coated his body with ash.
2.Kavithvadham sath varameva modhaan,
Nathalye shambhu manobhiramam,
Namami yasee krutha sara meyam,
Namyaham Bhairavam Induchoodam.
I salute Bhairava who wears the crescent,
Who is poetic and grants good boons,
Who is Shambhu in the mind of his devotees,
Who is bewitching to the mind,
And Salutations to one who has made his dog famous.
3.Jaradhi dukhouga vibhedha daksham,
Viragi samsevya Padaravindam,
Narapathipathwa prathamasu nandre,
Namyaham Bhairavam Induchoodam.
I salute Bhairava who wears the crescent,
Who removes the sorrow of old age,
Whose lotus like feet is worshipped by saints,
And who is the Lord of men and great saints.
4. Samadhi sampatj prathamana thebhyo,
Rema thwad yachitha pada padmam,
Samadhi nishtai sthara sadhi gamyam,
Namyaham Bhairavam Induchoodam.
I salute Bhairava who wears the crescent,
Whose first wealth is Samadhi,
Whose lotus like feet is begged by Rema,
And who enters in to Samadhi easily.
5.Grama gamyam, manasabhi dhooram,
Characharasya prabhaavathi hethum, Karaba soonya mathabhiramyam,
Namyaham Bhairavam Induchoodam.
I salute Bhairava who wears the crescent,
Who goes to the villages and is far away by his mind ,
Who is the cause of dazzle of moving and unmoving things,
Who is produced from nothing and entertains his mother.
www.mahayogini.com﻿﻿